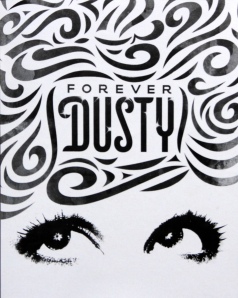 In our disconnected world where a four-year-old computer is considered obsolete and music genres are obsessively classified into an almost infinite number of sub-genres throughout the internet, it seems remarkable that any one woman could rule the airwaves.

But in the 1960s Dusty Springfield was the queen. Today’s female singers and, for that matter, anyone striving for equality, owe her a great debt.

Kirsten Holly Smith is a brave woman for taking on the persona of Dusty Springfield in Forever Dusty, a musical written by Smith and her husband, Jonathan Vankin.

It’s such a compelling story that I had to research the truth after seeing Smith’s version at New World Stages on W 50th in NYC. Turned out it was accurate.

She was just as comfortable in a duet with Jimi Hendrix or Martha Reeves as she was singing with crooners like Tom Jones. Dusty Springfield is remembered for songs like Son of a Preacher Man, The Look of Love, Wishin’ and Hopin’, I Only Want To Be With You, and You Don’t Have To Say You Love Me.

Last week, I sat down with Kirsten Holly Smith to talk about her fascination with Dusty Springfield, who was both an icon and an enigma.
“There is still so much to learn about her,” said Smith.

It took five years for Smith to bring Forever Dusty to New York. Along the way, Smith has met people ranging from Paul McCartney to people who had been in the same addictions recovery groups as Springfield.

McCartney told Smith about his first meeting with Dusty Springfield that happened when the Springfields were on a bill with the Beatles at the Cavern Club in Liverpool.

“He didn’t think he was going to like the folksy trio,” said Smith. “But Paul and Dusty bonded over soul music. They became friends. Although they lost touch, they reconnected when Dusty had breast cancer. Paul said he always thought of her as this young Irish girl.”
Springfield lived a life of contradiction.

“Actually, she was very insecure,” said Madeline Bell, one of Dusty’s backup singers. “The soul, the makeup, the hair, the costumes. It was all a mask she could hide behind. Once she went on stage, she was Dusty. Once she came off the stage, she was Mary. But every interview would go to her sexuality. She said, ‘It’s got nothing to do with the records I make. I’m on the charts and they want to know who I’m screwing.’”

“She was ahead of her time,” said Smith. “The stars aligned for her.”

Springfield did not stick to a predictable format. Recording companies couldn’t pigeon-hole her.

In 1962, The Springfields’ Silver Threads and Golden Needles debuted on the US Pop charts.

That same year, while visiting New York City, in a music store only a few blocks from where Forever Dusty is playing, Springfield heard The Exciters recording of Tell Him. Springfield was so impressed with the sound and recording style that it influenced her to begin a solo career with a pop/soul direction.

Dusty Springfield introduced R & B to the UK, exposing the country to such bands as the Supremes and Martha Reeves and the Vandellas (Martha Reeves recently attended a performance of Forever Dusty).

As Forever Dusty unfolds, so does the tumultuous decade of the sixties. Newspaper headlines flash on the backdrop. In 1964, Springfield refused to perform to a whites-only audience in South Africa. When she performed for a mixed audience in Cape Town, the police arrested her. After days in a hotel, refusing to apologize or sign documents recognizing that she had broken South African laws, she was deported.

A touching story about Springfield’s departure from South Africa emerges in Forever Dusty.

After being escorted to the airport by armed guards, Springfield and her band walked across the tarmac to their flight. Along the tarmac, black airport porters lined up in a row, removed their berets and held them over their hearts. They remained in position as a sign of respect, forming an honour guard as Dusty Springfield climbed the steps to the plane.

“It was not my intention to spark an international incident, but rather to simply play my music to everybody, equally,” said Springfield.

During the musical, newsreel footage on the backdrop shows abuse in South Africa and growing civil rights clashes in the United States.

Springfield broke other social taboos of the era. From mid-1966 to the early 1970s, Springfield maintained a discreet romance and domestic partnership with a woman and, later, in Los Angeles, with several women.

Storms rumbled on Dusty’s personal horizon. Forever Dusty doesn’t sugarcoat Mary O’Brien’s faults and weaknesses. There are scenes that are painful to watch. At centre stage, Smith sits on the floor as Springfield in a state of depression, slashes her arm open and then wails one of her songs. It’s a chilling scene of a tortured inner world.

“She’s so strong and she’s so powerful and she’s so flawed as a human being,” said Smith. “She didn’t feel good enough. Self abuse and an addiction to drugs and alcohol were her demons.”

While doing extensive research for the script, Smith talked to people from Springfield’s addiction days.

“It was a terrible time for her in L.A.,” said Smith. “She’d be living at halfway houses and even signed herself into a mental institution.”

People who have seen Forever Dusty have been impressed.

“Paul Huntley donated the wigs for the show,” said Smith. “He loves Dusty and did her wigs in the 60s. Things like meeting Paul McCartney and having Paul Huntley show up and donate wigs worth thousands and thousands of dollars because of his love for Dusty have happened around the show.”

There is still so much to learn about this brilliant artist. Kirsten Holly Smith tossed a new tidbit my way during our interview.
“Did you know she was responsible for getting Led Zeppelin recorded?” she asked. I didn’t. “John Paul Jones was a bassist in her band. She brought him and his new band, Led Zeppelin, to the attention of (music producer) Jerry Wexler, who signed them.”
Near the end of Forever Dusty, there were tears in the house as Mary O’Brien, dying of breast cancer and confined to a wheelchair, says to her brother, “I want to go home.”

The denouement of the show has Mary O’Brien back in Ireland, where her ashes were scattered at the Cliffs of Moher.
As the cast returns to the stage for a final song, “Don’t Forget About Me”, Smith encourages the audience to never forget Dusty Springfield.

During Springfield’s induction into the Rock and Roll Hall of Fame, her friend Elton John noted, “Dusty was the greatest white singer there ever has been.”

For more information about the musical, visit http://www.foreverdusty.com

Next blog: Kirsten Holly Smith, the actor and ghost of Dusty Springfield.